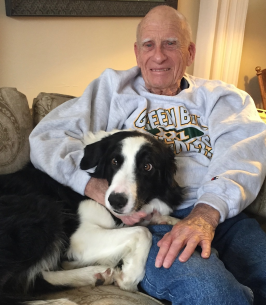 On August 26, 2021, in Price, Utah, with his family around him, William Bryner Ellis returned home to his Father in Heaven, and was joyfully reunited with his beloved wife; LaVe, son; Brent, and loved ones who have gone on before. Bill was born on September 16, 1927 in Price, Utah. He was the son of Dora Laseda (Bryner) and William John Ellis.

Some of dad’s favorite memories growing up were spent in Carbonville, Utah. His parents would put him on the train or bus in California, and he would travel by himself to spend the summer with his grandmother and cousins. They would ride horses from Carbonville to Mini Maude where he learned the value of hard work.

Dad joined the Coast Guard and served in World War II for two years with an honorable discharge. He was proud of the service he was able to give to his country. His family enjoyed listening to the stories of all his adventures.

On February 17, 1949, Bill married LaVe Taylor in the Salt Lake Temple. Together they raised six children. As a family, they enjoyed camping, touring Canyonlands, fishing at Moon Lake, and California beach trips. Many happy days were spent bowling in a league and traveling with friends. He was a faithful member of The Church of Jesus Christ of Latter-day Saints. He served many years as a ward clerk and served as a Veil Worker at the Salt Lake Temple for 25 years. As a couple, they served a mission at Welfare Square for ten years.

Dad worked for Utah Power and Light for 35 years where he took pleasure in the association of his coworkers, finally retiring 43 years ago. This allowed him time to spend with his children, grandchildren and great grandchildren. They especially looked forward to the annual waterslide party in grandpa’s backyard.

He is survived by his children: Lynn (Marilyn), John (Linda), MaryAnn (Kevin), Stephen (Kris), Peggy (Dave). He was preceded in death by his parents, wife; LaVe and son; Brent.

The family wishes to thank Rocky Mountain Hospice for the love they gave to our father/grandfather. They truly are angels.

Graveside Services for William will be held on Wednesday, September 1, 2021, at 11:00 a.m., at Elysian Burial Gardens in Salt Lake City, Utah. The cemetery is located at 1075 East 4580 South in Salt Lake City, Utah. There will also be a viewing held at Fausett Mortuary of Price, Utah, on Tuesday, August 31, 2021 where the family will receive friends starting at 5:00 p.m. to 7:00 p.m. The mortuary is located at 680 East 100 South in Price, Utah. Services are in the care of Fausett Mortuary of Price and Castle Dale, Utah where friends and family can leave condolences by going to www.fausettmortuary.com.