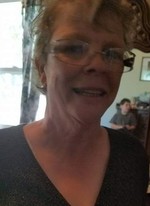 Sandy was an active member of the Church of Jesus Christ of Latter-day Saints. She was always up for a church party and loved donating her time to humanitarian service and contributing for funeral and party dinners. She enjoyed going to the Senior Citizens Center for lunch and staying for card games and also doing needle point.

She was born with complications during birth which left her with a shaking disorder. Despite her complications, she was always cheerful and enjoyed life. She loved her family and always said she couldn’t have found a better husband if she would of went looking, and everyone agreed Ross was there for her until the end. She loved him dearly.

Sandy enjoyed playing cards, games, going to the movies, parties, shopping, and inviting friends and family for dinner parties and game night to follow. She loved camping. She loved helping seniors by shopping for them, or whatever they needed, or bringing meals if anyone was sick. She would do anything for her grandchildren.

Services will be held on Monday, September 23, 2019 at 11:00 a.m. at the Hope Center in Price, UT.
Care of Sandy has been entrusted to Fausett Mortuary. Friends and family may sign the online guestbook and share a memory of Sandra at www.fausettmortuary.com.