To share your memory on the wall of Robert Kohler, sign in using one of the following options:

Provide comfort for the family of Robert Kohler with a meaningful gesture of sympathy.

Bob’s first paying job was at the Homestead Resort, just a half mile from his home. He worked maintaining the grounds for 65 cents per hour eventually being promoted to kitchen help and life guarding in the summertime. He graduated from Wasatch High School in 1964. He was called to serve a mission for the Church of Jesus Christ of Latter-day Saints and joyfully served from 1965-1967 in the North Island of New Zealand. He loved the people, the country, and the culture of the islanders as he faithfully served.

Upon return from his mission, Bob had a personal goal: “Make a date in ’68. Make her mine in ‘69”. And so he did. He met Linda Thompson at BYU. She thought Bob was even cooler than his brand new 1967 Camaro Super Sport. They married on May 29th, 1969, in the Logan Temple. They have loved, cherished, and cared for one another for 50 years. Together, they raised four boys and two girls and now are blessed with 23 grandchildren to adore and brag about.

Dad spent most of his career working for John Deere in sales and service. He was fiercely brand loyal, and the family colors unofficially became green and yellow. He also taught Vocational Education at the Youth Services Center for several years.

Dad treasured time shared with his family and took advantage of those precious moments to teach important life lessons that helped sculpt the character and values of his children. He enjoyed fishing, following PBR, and watching Hallmark movies and mysteries with his sweetheart. Owing to his love of talking with and listening to others, Bob was an avid Ham Radio operator.

Dad and Mom both have a deep commitment to and abiding faith in the Lord Jesus Christ. They have always loved and served joyfully in His church.

Dad was blessed here on earth to be surrounded by loving family, as a child, as a father, and as a grandpa. He was a genuine friend and valued the time spent connecting with others.

Bob Kohler faced his mortal life with faith, service, conviction, hard work, and a smile. He will be missed and remembered by many, but most of all by his sweetheart and family whose lives were blessed by his love.
Read Less

We encourage you to share your most beloved memories of Robert here, so that the family and other loved ones can always see it. You can upload cherished photographs, or share your favorite stories, and can even comment on those shared by others.

Wilma and Dale sent flowers to the family of Robert S Kohler.
Show you care by sending flowers

Posted Apr 15, 2019 at 10:15am
We are so sorry to hear of Bob's passing. I have many fond memories of Bob when were kids. He and Paul tried to teach me about life on a farm. Bob always had such a peaceful spirit. We have lost track of many of the family while moving around and would love to reconnect. Kim Witt kimwitt@live.com
Comment Share
Share via:
JJ

Posted Apr 14, 2019 at 09:46pm
Aunt Linda and family, I feel blessed to have had the opportunity to attend the services for Uncle Bob. What a wonderful tribute the kids gave to their father. Thank you for sharing your memories. His life was an example of selflessness and I came away wanting to be a better person, to love more fully, and to serve joyfully. May God continue to bless and comfort you~
Comment Share
Share via:
KT

Posted Apr 13, 2019 at 10:36am
Bob Kohler: You were, arguably, the dearest, sweetest, kindest, most gentle man I ever knew. Of course you picked a kindred spirit in lovely and loving Linda! What a wonderful ride you two had together in this life. Linda, I hope you know my heart swells with gratitude for having known the two of you. I share in your grief over the loss of your dear Bob. The veil is thin for those who love, and grief is the price we pay for having loved. Karyn

I knew Bob from my childhood. He was a wonderful young man. Fond memories of our times together. Rest In Peace, love and prayers to Linda and family. Barbara Zenger
WD

Posted Apr 12, 2019 at 12:42pm
Wishing you peace to bring comfort, courage to face the days ahead and loving memories to forever hold in your hearts. With love always...

Wilma and Dale purchased flowers for the family of Robert Kohler. Send Flowers 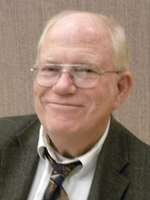