To share your memory on the wall of Price Thrall, sign in using one of the following options:

Print
Price Allan Thrall, age 91, passed away peacefully on October 7, 2019 at his home. His loving wife and good friend were at his side.

He was born July 28, 1928 in Little Rock, Arkansas. He was raised in Conway, Arkansas by his aunt an... Read More
Price Allan Thrall, age 91, passed away peacefully on October 7, 2019 at his home. His loving wife and good friend were at his side.

He was born July 28, 1928 in Little Rock, Arkansas. He was raised in Conway, Arkansas by his aunt and uncle. His parents were Ellen Price and Quentin Thrall.

Price married Julia Vincent-Thrall on October 12, 2002 and were later sealed in the Mount Timpanogos Temple. He was a member of The Church of Jesus Christ of Latter-Day Saints.

He joined the Army at age 15 1/2 and served in the 101st Airborne during WWII and later in the Korean and Vietnam Wars. He was a guard at the Nuremburg War Trials. Through the GI Bill, he received his college education including his Doctorate Degree. Price started his career teaching History and coaching football. He retired as a superintendent of schools in Texas.

Price loved to be outdoors. He had a green thumb and raised so many plants. Many who came to the house were given a plant to take home with them. Working in his shop was fun for him. Later in life he enjoyed watching old westerns and military movies on TV. He liked to read biographies. Price was extremely proud of his time in the United States Military. He became very upset when people spoke unkindly about our country. He spent years researching family history, collecting about 5,000 names.

He is survived by his wife Julia Vincent-Thrall, and six children: Mary Ellen Basham, Texas; James Thrall, West Virginia; Susan Knight, Texas; Marc Thrall (Veronica),Texas; Christie Garfield, Texas; and Jeanette Hendrickson (Ray) of Washington. He was preceded in death by his parents and brother (Quinton Thrall). He leaves behind 11 grandchildren and 6 great-grandchildren.

Because of his patriotism, he was a member of the American Legion, Disabled American Veterans and the Veterans of Foreign Wars.

To send flowers to the family or plant a tree in memory of Price Allan Thrall, please visit our Heartfelt Sympathies Store.

Receive notifications about information and event scheduling for Price

We encourage you to share your most beloved memories of Price here, so that the family and other loved ones can always see it. You can upload cherished photographs, or share your favorite stories, and can even comment on those shared by others. 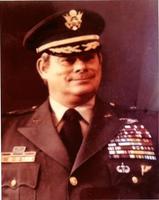