Obituary for Phebe A Peterson 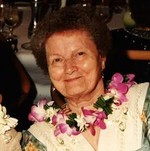 Phebe Amelia Peterson passed away on September 4, 2020. She was born on August 5, 1925 in Layton, Utah to George Fredrick Ellis and Phebe Ellen Porter Ellis and was the oldest of nine children.

She grew up in Layton and attended schools in Layton until 8 th grade. 7 th grade was at North Davis Jr High School in Clearfield, Utah. She attended 10 th and 11 th grades at Davis High School in Kaysville, Utah. In June 1968 Phebe received her High School diploma from Eureka High School in Eureka, CA at age 43 for which she was proud of.

Phebe was active in the Church of Jesus Christ of Latter-day Saints. She served as secretary, MIA activity counselor, visiting teacher, magazine representative, Relief Society President, teacher in Relief Society, Primary and Sunday School. In 1954-1956 she served a stake mission in the Carbon Stake. She also served a mission as an LDS employment worker and genealogy mission for Wellington Stake. She completed LDS girl’s camp training and was also a camp group leader and was an honorary Beehive girl and a Golden Gleaner.

Phebe was also a member of the Daughters of the Utah Pioneers and volunteered for over 30 years at the Castleview Hospital as a Pink Lady.

She has lived in Kingman, Arizona, Eureka, California and Wellington, Utah.

Phebe is survived by one stepdaughter by marriage to Cloye Peterson; Sharra Booth of Highland, UT ; 12 grandchildren; 43 great grandchildren and 37 great- great grandchildren and lots of nieces and nephews. She is also survived by a brother John (Chris) of Buckeye, AZ and one sister; Sarah Janet Fink of SLC, UT. Her siblings blessed her with several nieces and nephews, which she adored. She also had many dear friends and loved traveling with some. She rarely missed sending a card to many for every occasion and on every holiday.

Preceded in death by parents, husband Cloye and also Glen Beal and Earl Pate and many others.

A viewing will be held Saturday, September 12, 2020 at Fausett Mortuary, 680 East 100 South, Price from 9:30 – 10:45 am. A funeral service will follow at 11:00 am. Due to Covid please join us on the Fausett Mortuary Facebook page for a live stream of the service or watch later at any time. Interment will be at the Cleveland Cemetery under the direction of Fausett Mortuary.