To share your memory on the wall of Mac & Geraldine Brimhall, sign in using one of the following options:

Provide comfort for the family of Mac & Geraldine Brimhall with a meaningful gesture of sympathy.

Print
Mac Bowen Brimhall and Geraldine "Jeri" Taylor Brimhall died June 13, 2019, approximately six hours apart, at their home in Springville, Utah. He was 82 and she was 81.

Mac was born in Spanish Fork on May 4, 1937 to Clifton “Pete” B... Read More
Mac Bowen Brimhall and Geraldine "Jeri" Taylor Brimhall died June 13, 2019, approximately six hours apart, at their home in Springville, Utah. He was 82 and she was 81.

Mac was born in Spanish Fork on May 4, 1937 to Clifton “Pete” Brimhall and Haldora “Dora” Bowen. He lived for some of his early years in Salem and graduated from Spanish Fork High in 1955. He attended BYU and also served in the Utah National Guard.

Jeri was born in Payson on June 11, 1938 to Sterling Taylor and (Mary) Lucille Johnson. She attended schools in Payson and graduated from Payson High School in 1956.

They were married on August 29, 1956. The marriage was later solemnized in the Manti LDS Temple.

Mac and Jeri served in many callings for the Church of Jesus Christ of Latter-day Saints, Mac served in several bishoprics and Jeri in several Relief Society presidencies. They served together as temple workers in both Provo area temples. In their later years, they also enjoyed traveling worldwide with a beloved group of friends.

They are survived by their five children Abbie (Scott) Finlinson of Payson, Rebecca (Evan) Graves of Campbell, California, Cliff (Amberly) Brimhall of Payson, Eric (Cheri) Brimhall of Winchendon, Massachusetts, and Brig (Elaina) Brimhall of Las Vegas, Nevada. They loved each of their 22 grandchildren and 10 great-grandchildren. Mac was preceded in death by three siblings: Joan (Bill) Bellows, Roy (Joann) Davis, and Sharee (Mark) Johnson; and Jeri was preceded in death by a brother, Gordon Taylor.

To send flowers to the family or plant a tree in memory of Mac & Geraldine Brimhall, please visit our Heartfelt Sympathies Store.

Receive notifications about information and event scheduling for Mac & Geraldine

We encourage you to share your most beloved memories of Mac & Geraldine here, so that the family and other loved ones can always see it. You can upload cherished photographs, or share your favorite stories, and can even comment on those shared by others.

Meadow Brook and Peter & Willa Knight family have sent flowers to the family of Mac & Geraldine Brimhall.
Show you care by sending flowers

Flowers were purchased for the family of Mac & Geraldine Brimhall. Send Flowers

Posted Jun 17, 2019 at 10:58am
Brimhall Family, Our thoughts and prayers are with you during this difficult time.

Bright and Beautiful Spray was purchased for the family of Mac & Geraldine Brimhall. Send Flowers

Posted Jun 16, 2019 at 03:50pm
I got to know the Brimhall's when their youngest son Brig went to elementary and Jr high school with my daughter. Brig and Joysanne played together a lot, she would spend a lot of time at his home and he at ours. So I would get to visit with his parents, they were so kind and gentle and patient. They had Brig at a much later time in life and yet were such good parents to him and I was always so comfortable around them and appreciated their knowledge and experience. I asked Brig a year ago about his parents and all was fine, so it was a shock to hear that they both passed away and on the same day. I hope that their family will be comforted at this time and that they can look forward to the day when they will see them again.
Comment Share
Share via: 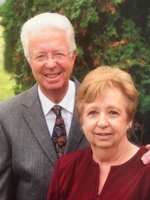