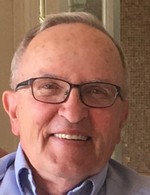 Henry Lee (“Hank”) Hall passed away October 1, 2019 after being diagnosed with sarcoma in late August. He died on his terms, comfortably, in the amazing care of Morning Star of Boise, and his daughter Elizabeth Ramsey.
Anyone who knew our dad realized that he was not perfect, and did not claim to be. However, he was the perfect dad!

Henry was born January 7, 1935 to Major Frederic Hiller Hall and Lavina Cramer Hall. Hank was an army brat and traveled the world. He started off small being born at Ft. Lewis, WA, but gained a love of history and mankind as he traveled the world with his parents and brother Charlie. He spent time as a young boy in post WWII Germany as his father was assigned to Berlin and then Munich.

Henry went to high school in Seattle, WA, and it was there he was baptized a member of the Church of Jesus Christ of Latter-day Saints. Our dad loved the Lord and served a mission in Mexico. After his mission, he attended BYU. It was while he was at BYU, that his friends set him up on a blind date with a University of Utah nursing student. Ruth Marie Gold was a great catch, which is why they were able to overlook the college rivalry and were married September 9, 1960.

Henry and Ruth settled in Portland Oregon, where they raised six children. Henry started a tradition for his children of loving education and teaching. He taught for over 30 years in Oregon. Five of his six children have followed his example and work in the education field.

Serving his Father in Heaven was important to Dad. He was a bishop many times, a counselor in the Stake Presidency, a home teacher, and accepted any calling extended to him.

Exercise and running filled his free time for many years. He ran his first marathon at 50! At 70 he ran the Disney World half marathon and left many younger people in his dust. When he was no longer able to participate in sports, he loved to watch football and discuss the games with everyone, especially anyone who was a BYU fan.

Henry was and is a great dad. He taught us all to be hard workers, set an example of being honest in all that he did, and he loved his family. He leaves behind his children: DeeAnn Brewster; Marilee (Richard) Hullinger; Laura Hall; Larry (Sarah) Hall; and Elizabeth (Loren) Ramsey; 14 grandchildren and 7 great-grandchildren; and sister-in-law Gayle Hall. Preceded in death by his sweetheart Ruth-Marie; son Ricky; his parents; and his brothers (Bob Raynor, John Raynor, and Charlie Hall).

A special thanks to the assisted living staff at Morning Star and to all of those who loved our dad.

Condolences can be shared at www.legacyfunerals.com.