To share your memory on the wall of Harold Smith, sign in using one of the following options:

Provide comfort for the family of Harold Smith with a meaningful gesture of sympathy.

Print
Harold Derrell Smith, of Payson, Utah, passed away at the age of 77 on January29, 2019 at the Mountain View Hospital in Payson, Utah from pneumonia and complications of Progressive Supranuclear Palsy.

Hal was born on May 12, 1941 in Salt... Read More
Harold Derrell Smith, of Payson, Utah, passed away at the age of 77 on January29, 2019 at the Mountain View Hospital in Payson, Utah from pneumonia and complications of Progressive Supranuclear Palsy.

Hal was born on May 12, 1941 in Salt Lake City, Utah. His parents are Harold Oscar Smith and Clare Lorraine Wiseman. Hal attended Salt Lake City schools and graduated with a Bachelor’s Degree in Civil Engineering from the University of Utah in 1963. He went on to complete a Masters’ Degree in Electrical Engineering at UCLA in 1972. He served his country in the Coast Guard from 1960-1968. Hal married Linda Lewis in June 1962. After a divorce, he married Jonelle Baxter on January 30, 1971. They shared a wonderful life together for over forty years, building loving relationships with their four sons and their spouses, grandchildren, and great-grandchildren. After she passed away, Hal married Maudie Jean Wells on June 15, 2013. He and Maudie have enjoyed traveling, serving in the San Diego Temple, and spending time with family. Hal lived in California, Virginia, and Utah.

Hal worked for the United States Government for over forty years, working his way up to Senior Supervisor in charge of Naval Research and Development. He earned many awards, including the prestigious John A. Dahlgren Award.

Hal was a member of the Church of Jesus Christ of Latter-day Saints. He held many church positions, including teacher, bishop, and template ordinance worker. He and Jonelle served in the San Diego Temple for many years, culminating in filling a mission for the Church in Palmyra, New York. Hal enjoyed reading, camping, fishing, hunting, and golfing. He also loved to study and teach the gospel of Jesus Christ. Hal enjoyed working on his family history, traveling, and playing games with his family.

Hal is preceded in death by his wife Jonelle, his parents, one daughter, and two grandsons.

The funeral will be held on Saturday, February 2, 2019 at 11:00am at 75 South 600 East in Payson. There will be a viewing prior to the funeral at 9:30am at the same location. Burial will be in the Spanish Fork City Cemetery.

The family of Harold Derrell Smith thanks iCare Home Health and Hospice, and Legacy Funerals & Cremations for their excellent, caring services.
Read Less

We encourage you to share your most beloved memories of Harold here, so that the family and other loved ones can always see it. You can upload cherished photographs, or share your favorite stories, and can even comment on those shared by others.

Larry and Kay Hill sent flowers to the family of Harold Derrell Smith.
Show you care by sending flowers 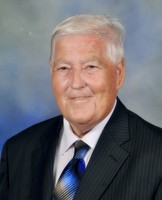