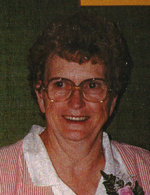 WELLINGTON – Fawn Henrie Davis Wilder, age 93, passed away on November 26, 2018 at the Beehive Home in Price, Utah. She was born October 25, 1925 in Clawson, Utah the 9th child of Lenora May Nelson and Wyler Daniel Henrie. She married Fred Leonard Davis, February 5, 1944 in Wellington, Utah. Their marriage was solemnized April 1, 1965 in the Manti Temple.

Fawn was raised in Clawson, Ferron, and Wellington, Utah. She was 22 months old when her father died. Owner of Fawn Café in Wellington for 10 years. She worked at Koret of California for 20 years, she was a talented seamstress.

She was an active member of The Church of Jesus Christ of Latter-day Saints, serving in many callings. She served with her husband Sy in the Manti Temple for 8 years.

We thank Beehive for their compassionate service.

Services are being held Saturday, December 1, 2018 at 11:00 am at Wellington 1st & 4th Ward building (47 North 100 East, Wellington) with a viewing being held prior to services from 10:00 – 10:45 am. A viewing will be held Friday, November 30, 2018 from 6:00 – 8:00 pm at Fausett Mortuary. Interment will be in the Wellington City Cemetery. Family and friends may sign the online guestbook and share a memory of Fawn at www.fausettmortuary.com.