To share your memory on the wall of Evelyn Conner, sign in using one of the following options:

Evelyn was born Evelyn Doreen Forness on February 28, 1954, in Hibbing, MN. She was raised and attended high school i... Read More
Evelyn Doreen Conner, age 67, of East Carbon, Utah, passed away at the Carbon Medical Services on March 30, 2021.

Evelyn was born Evelyn Doreen Forness on February 28, 1954, in Hibbing, MN. She was raised and attended high school in Babbitt, MN. Evelyn has lived in several states (Washington, Arizona and Oregon) before settling in Utah.

Evelyn was a wife, mother, sister, aunt, grandmother and a great grandmother. She enjoyed playing cards, socializing with her friends, watching Hallmark (sometimes with ice cream as an extra treat), and communicating with her extended family and friends via social media. Spending time with family was important to her. She was fun to have around and had a quick sense of humor and wasn’t above acting silly from time to time. She loved her family above all things, uprooting her life to care for both aging parents at various times in her life. She more recently enjoyed taking care of her pets, which she called her “new babies.”

She is preceded in death by her father, Donald Forness; mother, Lois Church; sister, Peggy Swanson; grandchild, Krystal Cozo and a great-grandchild, Astra Cozo both deceased at time, or shortly after, birth.
Evelyn is survived by her daughter, Tina Allison and her husband, Matt Allison of Ladera Ranch, CA; daughter, Christie Thom of East Carbon, UT; son, Samuel Thom of East Carbon, UT; her 11 grandchildren (some with spouses); 5 great grandchildren; brother, Richard Forness and wife Colleen Forness (Nevada); brother, Samuel Forness and his wife Eloisa Forness (Kissimmee, FL); brother, Jim Forness and his wife Cindy (Spring Creek, NV) and multiple nieces and nephews (some with spouses and children) and aunts.

For those wishing to pay their respects, services will be jointly held with her mother, Lois Evelyn Church, at The Willows Inn, Central Point, OR, on April 14th, from 11:00 AM - Noon.

Evelyn’s mother, Lois, suffered from Dementia. For those interested in donating to fight Alzheimer’s disease and Dementia please donate to The Longest Day.

Family and friends may sign the online guestbook and share memories of Evelyn at www.fausettmortuary.com.
Read Less

Receive notifications about information and event scheduling for Evelyn

There are no events scheduled. You can still show your support by sending flowers directly to the family, or planting a memorial tree in memory of Evelyn Doreen Conner (Forness).
Plant a Tree

We encourage you to share your most beloved memories of Evelyn here, so that the family and other loved ones can always see it. You can upload cherished photographs, or share your favorite stories, and can even comment on those shared by others.

Plant a Tree in Memory of Evelyn
Plant a tree 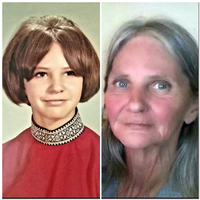