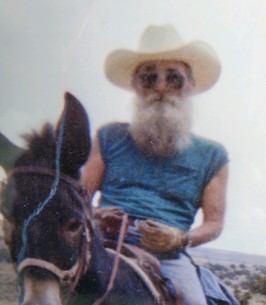 Derald was born on January 19, 1934 to Josephus and Martha Prettyman in Price, Utah. He married Beulah Haycock. They had six daughters together, and later divorced. He met and married LaVerne Everett in 1973. They were married for 47 years.

Derald and LaVerne loved to travel all over the country on their motorcycle. He loved his horses, mules and the trail rides with family and friends. He and his buddies – Dennis Lee, Mick Axelgard and Bob Hoggat were always on a quest to find Butch Cassidy’s hideout and trails.

He was an avid outdoorsman. He loved fishing, camping, and hunting. He later found a passion for panning for gold and rock hounding in Arizona.

Spreading of the ashes ceremony will be in the near future.

Services are in the care of Fausett Mortuary, friends and family may share memories of Derald and sign the online guestbook at Fausettmortuary.com.