To share your memory on the wall of Daouda Toure, sign in using one of the following options:

Print
Daouda “Dee” David Jones Toure was born in Guinea-Conakry on June 17, 1982, to Amadou Toure and Mariama Soumah, and passed away at the age of 36 on January 3rd, 2019 at his home in Springville, Utah.

Sadly, at the age of 2, Daouda contracted Polio, and in an effort to save his son’s life, Amadou Toure gave Daouda up for adoption to a wonderful and selfless Foreign Service Officer, Mary Roberta Jones.

A few months later, Dee’s sister, Fatoumata Toure, joined the family that later became known as the three Musketeers by their family friends.

Daouda and his sister were blessed to have lived in Guinea, Ghana and Cameron as their mom got assigned to different countries. Summers were spent in Paris, France, Washington DC and Rhode Island.

Daouda especially liked the summer spent on a ranch in Billings, Montana, where he excelled in horse back riding and visited Yellowstone park with the other Musketeers. Daouda’s life was rich and full of adventure. If you ever got a chance to talk with him, he would fill you in with vivid life stories accompanied with lots of laughter. Dee was a historical and political intellect and an actor, as he enjoyed theater and plays, such as Macbeth, Les Miserables and A Summer’s Night, frequenting the Shakespeare theater and the Kennedy Center. Lots of knowledge flowed in his beautiful head.

Fast forward a good few years, Dee is in Provo Utah, living with his now ex-wife Sarah Roylance, before permanently settling in Springville, Utah, while he held down a few jobs.

Dee settled down with his then wife Sarah who bore him three healthy and exceptionally good looking children, Fatima Rose Josephine, his princess as he always called her; and his two princes, Rodney “Booboo” Toure, and Keenan “Baby baba” (Lil cookie monster) Ahmed Toure.

Daouda was a truly handsome, wholehearted and supportive little brother who had a fear of elevators and planes. He once took a three day train ride to come and be by my side as I worked through a rough patch in my life.

Daouda will be terribly missed by his kids, his sister, his entire extended family and friends.

He is preceded in death by his adoptive mom and his biological mother.

He is survived by his three children, his sister, his father who is in Africa and many other siblings.
Read Less

To send flowers to the family or plant a tree in memory of Daouda Toure, please visit our Heartfelt Sympathies Store.

Receive notifications about information and event scheduling for Daouda

We encourage you to share your most beloved memories of Daouda here, so that the family and other loved ones can always see it. You can upload cherished photographs, or share your favorite stories, and can even comment on those shared by others.

Posted Jun 10, 2020 at 09:58am
This is Dr Michael Millis, who corrected Daouda's left hip problem with surgery in Boston in 1994. I have been searching for Daouda for years. I am so very sorry to hear of his passing.
Please--sister or children--be in touch with me to catch up.
With my sympathy----
Dr Michael B Millis
Boston Children's Hospital
michael.millis@childrens.harvard.edu
office phone: 617-355-6067
Comment Share
Share via:
TH

The Willows of Springville HOA

Posted Jan 12, 2019 at 06:28pm
We would like to share our thoughts, prayers and condolences with the family of Daouda Toure during this time of loss and grief. May your hearts and memories be filled with the love, joy and peace that you felt while in his presence, even though he is out of sight and touch for a time. If there is anything we can do to help, please feel free to reach out.
On behalf of The Willows of Springville Community,
Renae Bowen, HOA President
Comment Share
Share via:
NC

Posted Jan 11, 2019 at 10:34am
Thank you Dee for being so good and welcoming to everyone. I love the memories of playing volleyball together, getting those big hugs, and you singing in the choir at Christmas. You da man! We miss you.
-Norm Chambers
Comment Share
Share via: 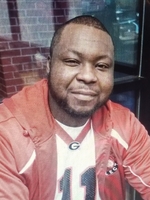