To share your memory on the wall of Charles Johnston, sign in using one of the following options:

Charlie J. Johnston, 86, of Helper and Alaska, died at home 22 July 2020. It’s likely you met him as he touched the lives of many, many friends and momentary strangers. He was sincerely interested in peopl... Read More
Charles (Charlie) J. Johnston

Charlie J. Johnston, 86, of Helper and Alaska, died at home 22 July 2020. It’s likely you met him as he touched the lives of many, many friends and momentary strangers. He was sincerely interested in people, especially those whom others would pass by, making everyone smile or laugh, comparing beards or heads of hair, and sharing stories, a touch, or a funny show of muscles.

He was born in St. Paul, Minnesota, 7 March 1934, into a Scots-Irish and Polish family of Dorothy Konopacki and Charles Dennis Johnston. He learned to hunt and fish from his uncles and father. He also began his love of reading and book collecting and always had his dog close to him. He was caught up in the Korean War, in the Army on the DMZ, just as the war supposedly ended but it didn’t.

He lived a full life, following his passions for dogs, the outdoors, art, books and reading, museums, fly-fishing, and of course friends. After using the G.I. Bill to graduate from the Minneapolis College of Art and Design, he made the small staff at the Science Museum of Minnesota an offer they couldn’t refuse and was hired as an assistant curator of exhibits, rising to chief curator. Part of his work included digging for dinosaurs and fossil turtles in the badlands of Montana’s Hell Creek where one summer a boulder knocked him off a cliff. The fall left him with many broken bones, five months in hospitals, and a permanent limp – but also a passion for exploration, wild country, and the West.

The U.S. Fish and Wildlife Service (FWS) recruited him when a Missouri River gold rush steamboat (Bertrand) was discovered deep under a cornfield on Desoto Bend National Wildlife Refuge between Iowa and Nebraska. He served as the chief interpretive specialist on the FWS’s National Planning Team that took him across the continent from Great Swamp Refuge in New Jersey to Wichita Mountains Refuge in Oklahoma, the National Elk Refuge in Jackson Hole, and to Alaska and Hawaii.

During this time he also developed his own art shows and started a publishing company. But museums were in his blood. He returned to the Science Museum’s nature center to develop natural history exhibits and teach children and adults art in nature, journal-keeping, fly-fishing, canoeing, and camping.

He retired in 1995 to enjoy many more lives: artist; daily fly-fisherman; grouse, woodcock and pronghorn hunter; and book collector. Thanks to the match-making of his daughter Patty, he reconnected with a former co-worker Elaine Rhode and started a 16-year adventure between Utah-Oregon-Alaska that put many miles on their car and hiking boots. He was an Artist-in-Residence on the North Rim of the Grand Canyon in 2007.

Charlie was preceded in death by his parents, aunts and uncles, his dearly-missed daughter Jane Ellen, ex-wife Patricia McDonald, and his partner in crime and collecting Bernie Fashingbauer.

Charlie requested no services. His ashes will be scattered in wild country at a later date. You have an opportunity to enjoy Charlie’s company one more time – when the USU-Eastern Prehistoric Museum in Price reopens. Go upstairs to the center gallery to browse his 70-year retrospective exhibit “Turning Life into Art” that includes paintings, sculptures, collections, and stories from his life.

Also you may go to www.fausettmortuary.com to sign an online guestbook and share memories. Thank you for making Charlie’s life brighter.
Read Less

Receive notifications about information and event scheduling for Charles

There are no events scheduled. You can still show your support by sending flowers directly to the family, or planting a memorial tree in memory of Charles J Johnston.
Plant a Tree

We encourage you to share your most beloved memories of Charles here, so that the family and other loved ones can always see it. You can upload cherished photographs, or share your favorite stories, and can even comment on those shared by others.

Posted Jul 29, 2020 at 09:00pm
Oh, Charlie. I knew you briefly, but your star shone bright. I enjoyed sharing dog stories with you. Thank you for the wonderful books. Your painting that you and Elaine gave me is one of my treasures. I don't want to say, "Rest in Peace," because I don't think peace is what you sought. So Rest In Adventure.
Comment Share
Share via:
JL

Posted Jul 28, 2020 at 11:25pm
Charlie-2-legs was a special person, I was always smiling when he was around. He accompanied guests Lady Elaine and Charlie-4-legs, who I suspect was the one who drove the car. He loved nature, literature, art and good wine. Kathy and I will miss him. Thank you Elaine for being such a good friend, wife and support for him. Jeff Larkin
Comment Share
Share via:
PS

Posted Jul 28, 2020 at 11:41am
Oh Charlie! I was thinking of you just the other day. I have missed your crazy hugs and your awe inspiring art. Your paintings grace my living room walls. Dear Elaine, I was shocked to see Charlie’s passing. I know you have lost your soulmate. Please know that you are in my warmest thoughts. He is at peace with his daughter.
Comment Share
Share via:
CL

Posted Jul 28, 2020 at 07:57am
We are saddened by his passing. We always enjoyed visiting with him. He was a very lively person.
Mike and Connie Leschin
Comment Share
Share via:
EC

I had the pleasure of hunting ducks and grouse with Charlie and working with him for several years on assignments to national wildlife refuges from coast to coast and Hawaii and Alaska. He always added a positive aspect to those trips with his creative talents and good joy. He left his positive mark in many places. Ed & Caryl Crozier 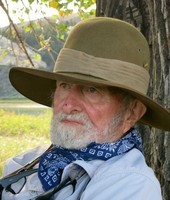