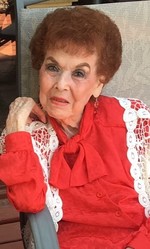 Artelle Sedwick passed away on December 29, 2019 in Payson, Utah at age 97. She was born on March 11, 1922 in Byron, Wyoming and was one of four daughters born to Ira Egan and Loraine Pearson.

She eloped with Donald Sedwick of Powell, Wyoming to Red Lodge, Montana on October 19,1939. They were seventeen and eighteen years old. They were sealed for time and all eternity in the Idaho Falls Temple of the Church of Jesus Chrrist of Latter-Day Saints on June 11, 1953.

They were married for 76 years and had three children, DeAnna McGee (Jesse), Kerry Sedwick (Svana) and Elwin Sedwick.
Donald passed on July 3, 2015.